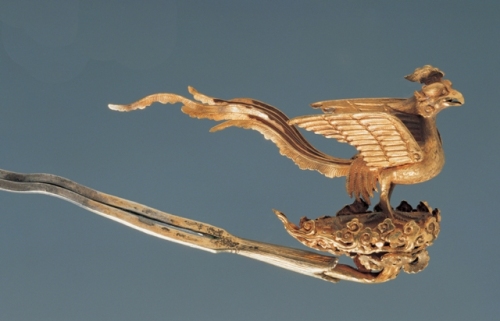 Gilded-silver hairpin in the shape of a phoenix. Liao dynasty.
Cultural Relics Store of Chifeng District.

Since marriage is not a spiritual state but a temporal state – for marriage ends when death doth two persons part – there is no inward spiritual grace to speak of: the external institution is itself the grace of God to bless the union of a man and a woman for the purposes of populating the earth, of civilized and holy use of sexual union, and of companionship and comfort. Marriage, as a temporal state undertaken by some, is no more than what the five senses can sense and the mind can naturally infer; to recognize it requires no internal witness of the Holy Ghost. Therefore it is important to the being of marriage itself that a wife’s marital status – a state of legal submission to her husband – be manifest to the eyes, for a secret marriage is no marriage at all.

In Chinese culture, however, the signs of marriage are not necessarily those used by Westerners. Whereas Western churches have used a metal ring to show that a wife is married, such a custom is alien to the Far East, introduced but a few decades ago. The confusion of wedding rings worn by both sexes, moreover, falls short of the ideal. Through the inroads of the jewellery industry’s aggressive marketing and of gender egalitarianism, this custom became popular in the United States and entered even the American 1928 Book of Common Prayer; but it has little to commend it as a sign of marriage as a social order. It is desirable, therefore, for the Chinese to find another sign that represents a woman’s being married.

Such signs may seem archaic in an age when even Mrs and Miss are dissolved in the indistinct Ms, but it remains useful to differentiate who is married and who is not. For a woman, since Eve was designed to be a paraclete (advocate, comforter, helper) to Adam, whether she has a husband is a crucial distinction. This is true whether or not the head covering that St Paul has in view in 1 Corinthians applies to married women only. And if St Paul’s injunction is indeed for married women, then there is additional reason for a married woman to set herself apart from unmarried women by a sign on her head that signifies, especially when she prays or prophesies, that she belongs to her husband.

In China, into the Republican era, unmarried women wore their hair braided in two long queues:

When they married, they changed their hair: 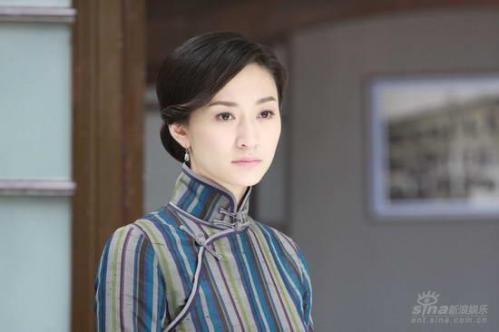 Often, hairpins and hair clips became prominent parts of a married woman’s adornment. After a wedding, in fact, a husband would put into his wife’s hair a hairpin she had given to him upon their engagement. The dressing of the hair, then, has formed in Chinese culture a significant part of the complex of symbols signifying a man’s headship of his wife.

Even in Ang Lee’s Lust, Caution (色，戒), set in the Second World War, there are traces of this custom. Wei Tang plays Wong Chia-chi, a first-year university student in Hong Kong who joins a patriotic student drama club in planning to assassinate the traitorous Mr Yee, an official who is working for the Japanese.

To conduct the espionage necessary, she becomes ‘Mrs Mak’. Not only have her clothes been dressed up considerably, but her hair is also completely different:

For a Chinese order of holy matrimony, then, a hairpin might be better than a ring. Though its ceremonial use seem archaic, and need moreover to be revived, its significance is easily inferred. It has the added benefit of being about the head and its hair, and thus signifying headship perhaps more obviously than a ring. Adorning the hair and clothing it with dignity, a hairpin or a set of them might effectively mark wives as wives, with the honour worthy of a wife. Perhaps some people would object to such adornments, but I think them both beautiful and fitting. Indeed, by Chinese reckoning, what is fitting is for that reason beautiful.

This entry was posted in Asia. Bookmark the permalink.