The social media have been hit by an article from The Guardian about hipster evangelical churches in the Silicon Valley. About the virtues and vices of hipster culture itself I have nothing to say here, but I did want to take the opportunity to think about buildings, coffee, money, and other such temporalities that people associate with the ministry of the Church.

To humans, places are important. He who discounts entirely the place of place denies a significant part of our being: our bodies. To try to maintain a place, then, is nothing out of order. How a place is used, or disused, or misused, bears greatly upon the people who live and work nearby. If there is a place one often passes by or goes to, its condition inevitably strengthens or weakens one’s morale.

The city of Oakland, for example, once installed a median to slow traffic at the corner of 11th Avenue and 19th Street. According to one resident, Dan Stevenson, this median was the scene of street dumping: ‘mattresses, tables, just junk, just continual junk, a lot of graffiti, a lot of urination and drug use kind of thing’. In fact, says another resident, ‘There was a couple of years when there was just a lot of street muggings and a lot of car break-ins.’ The area improved when Stevenson set up a buddha statue. From the statue has grown a shrine that some Vietnamese immigrants use and maintain, a shrine whose presence has led people to keep their neighbourhood safe and attractive. 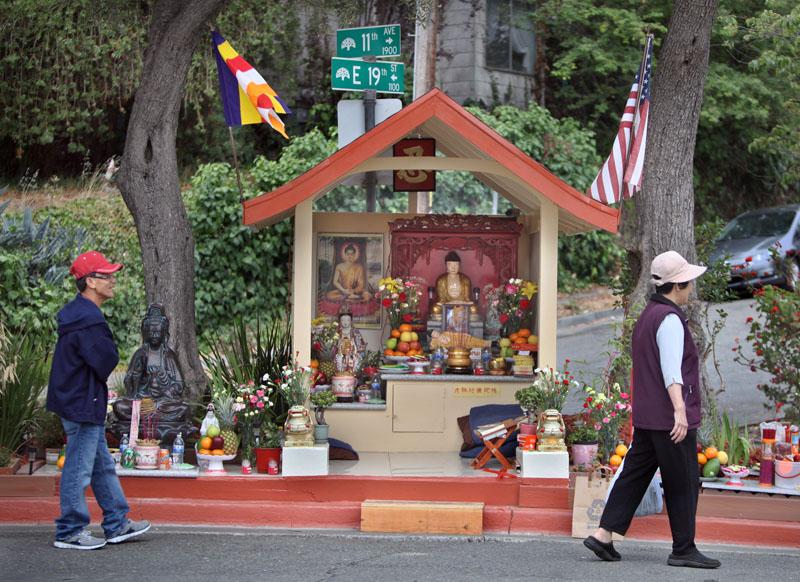 A Christian easily imagines that the same could be done with a high cross or a preaching cross. That place matters is a point, not of moral theology, but of natural reason even without the light of holy Scripture. For Silicon Valley folk to apply their entrepreneurial spirit to outward trappings of religion, then, is only natural.

In the big city, with its hustle and bustle, it is convenient that there should be a quiet place for Christians to pray at any time. This is true even when the need is lessened by a large number of wives and husbands who work at home and invite others to their homes for prayer. In the countryside an outdoor preaching cross or a shed may suffice, but in the city a temple (as the French Protestants have traditionally called it) could be of great use.

Each temple would be kept by a vestry, including perhaps a patron, which decided in common what clerics to invite. This vestry, and not any presbyter, would be responsible for the building; but it would take no part in shepherding a flock of people. Instead, it would only administer the building and, hearing the advice of clerics on the practical needs of worship – say, about acoustics – decide how best to meet these needs. The implementation could vary widely. A very rich patron, of course, might decide to build something quite opulent:

The chapel of Pembroke College, Cambridge.

The Son of Man, however, hath no place to lay his head. However convenient it is for the Church to have these places in which to pray and worship in quiet, these spaces are in no way part of the Church itself: the visible Church of Christ is ‘a congregation of faithful men, in which the pure Word of God is preached, and the Sacraments be duly ministered according to Christ’s ordinance, in all those things that of necessity are requisite to the same’. As Richard Hooker says,

In sum, the whole Church is a multitude of believers, all honoured with that title, even hypocrites for their profession’s sake as well as saints because of their inward sincere persuasion, and infants as being in the first degree of their ghostly motion towards the actual habit of faith; the first sort are faithful in the eye of the world, the second faithful in the sight of God; the last in the ready direct way to become both if all things after be suitable to these their present beginnings.

Therefore, none of the programmes that keep buildings up are what the Church herself is about, nor are they part of the Church except for that they are things done by the people of God. If these be the means of maintaining some buildings that provide places for the Church to use, I do not mind. Such programmes, after all, are simply what a community centre does, which is good and godly work; and if the God-honouring programmes compete against pagan versions, good. For such work, let enterprising Christians have the Church’s blessing and prayers. But we ought to make no mistake: to take these things as piety itself is to exchange the Christian faith with what the late Internet Monk, Michael Spencer, criticized as ‘churchianity’.

It is in this understanding that I hope the Church will proceed. It is a ministry of the body of Christians, led and encouraged by deacons, to attend to bodily needs. This ministry allows presbyters to devote themselves to the Apostles’ teaching and safeguard the sheep by teaching clearly the doctrine of the faith. But the funding and maintenance of buildings is only provisionally a work of the Church at all; far more important is tending to the poor, especially within the body of professing believers, by the collection and giving of alms and food. The latter has direct biblical warrant, the former none. For both, however, the Twelve Apostles made it clear that such work should be led by those who, though full of the Holy Ghost and of wisdom, and full of faith and power, were not the people’s primary teachers. Though it has been the wisdom of the Church to require usually that presbyters first prove themselves worthy as deacons, for which reason deacons have also assisted in public worship, the duties of a deacon are also distinct for a good reason, and should jealously be kept distinct.

This is not to say, of course, that what a deacon does is any less holy than what a presbyter does. In Christ, the whole work of the body of the Church is sanctified, in any field. Whatever is done piously is part of the living sacrifice the Church presents in Christ. This is why the virtues St Paul requires of a deacon are similar to those he requires of a presbyter, even though the work is different. Thus Matthew Henry:

The persons chosen to serve tables must be duly qualified. They must be filled with gifts and graces of the Holy Ghost, necessary to rightly managing this trust; men of truth, and hating covetousness. All who are employed in the service of the church, ought to be commended to the Divine grace by the prayers of the church. They blessed them in the name of the Lord. The word and grace of God are greatly magnified, when those are wrought upon by it, who were least likely.

And thus, too, the civil magistrates, and chiefly the reigning monarchs in their realms, have by nature a diaconal role: though they take no part themselves in judging and teaching what is the doctrine of the faith, they work to give the Church the temporal peace to do her work of proclaiming the gospel of Christ. In this role, John Wycliffe asserts even the right and duty sometimes to take away the use of property associated with gospel ministry: ‘If there is a God, temporal lords can legitimately and meritoriously take away earthly goods from a delinquent church. Whether the church is in such a state or not, it is not for me to discuss, but for the temporal lords to examine, and in the case contemplated to take away her temporalities under pain of damnation.’ I would use different terms than Wycliffe has chosen, and especially I would not use church the way he has. My point, however, is that the independence of deacons is such that they are not subject to the wills of the presbyters.

This independence, beginning in the Bible and in some ways more fully expressed in later times, is what allows the presbyters, who teach the word of God and sometimes even censure and testify against some Christians’ scandalous sins, to devote themselves to that teaching of the Apostles. The purity of the gospel is not subject to time and place. Though presbyters must teach in a language the people understand, the gospel they proclaim in word is one and catholic and apostolic, not varying from place to place. The deacons’ attention to local needs of the body is what frees the presbyters to serve as what Alastair calls the Church’s backbone:

While these functions [viz. of empathy and relatability] are not without their importance, I would suggest that a more apt representation of the pastor would be as the backbone and immune system of the church. As the backbone of the church, the pastor is the one who ensures that the body is communicating with its Head. He is the one who is primarily responsible for maintaining the form of the body, so that it is functioning robustly and strongly as a coordinated whole under its Head, rather than collapsing into a weak and amorphous mass. As the immune system of the church, the pastor is the one who maintains the healthy operation of the body, detecting and attacking all that would undermine it. The primary virtues of the pastor are not the virtues of the head, or even the virtues of the heart, but the virtues of the chest, such virtues as fortitude, commitment, whole-heartedness, firmness, strength, loyalty, resolve, valour, nerve, courage, and a love that isn’t sentimental.

So such things as buildings and budgets, though bearing sometimes very directly upon the Church’s ability to proclaim the gospel to the world, were wisely taken away from the cares of the Twelve, and today would wisely be kept away from the cares of the presbyters. Does the presbyter ask for tithes? Does he censure anyone for not paying? God forbid. It is the service of deacons, strong in the Spirit, that shows everyone how to give both body and substance for the sake of the gospel. Perhaps, like Stephen, they do great wonders and miracles among the people and so demonstrate to the Church how the Lord cares for the body as well as the soul. Perhaps, too, by martyrdom, they demonstrate how the Lord cares for the body with the soul, the body serving the soul’s fellowship with God. So the works of physical possessions are not unspiritual, but rather they call for a different kind of leadership, both enabling and bringing to the body the comfort and demands of the gospel. The deacons might even look like hipsters.

This entry was posted in Uncategorized. Bookmark the permalink.