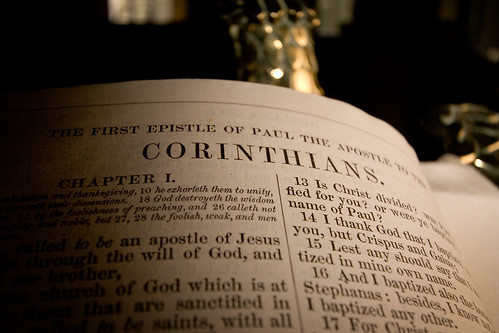 Responding to reports in the media of ‘high-church’ moves away from Baptistic evangelicalism, Albert Mohler attributes such moves to ignorance of the biblical message in Baptist churches and calls upon Baptist churches to improve their biblical teaching. Some who have, so to speak, left the Baptist fold have objected to his words. I am one of those Christians, I suppose, who have made the move that so troubles Dr Mohler about the future of the Baptist churches. As any regular reader of this blog discovers soon enough, I am a moderately high-church evangelical Anglican. But I think I stand somewhere in between Dr Mohler and his detractors.

If Baptist theology is in error – and I believe it is – then of course I hope that its errors will perish from the earth, and only its good points remain. If Anglican theology is in error – though I believe it fundamentally is not – then I hope the good Lord will extirpate its errors from his holy Church. Whatever one thinks of diversity of practice, doctrinal contradiction within the Church, if truth matters, is not good. Like many Protestants, I value toleration; but this is not to displace the præmium I place on truth. And I think the Anglican way is to seek unity in doctrine: the Church of England’s Thirty-Nine Articles of Religion were written ‘for the avoidance of diversities of opinions and for the establishing of consent concerning true religion’. For it is not sense – it is nonsense – to desire diversity for its own sake. Such a desire, in the matter of the service of God, is a desire for incohærence and finally dissolution. So I shall feign no affection for what I regard as error, and instead I pray, and I hope Baptists pray, that God, knowing what he himself has taught, may unite the Church in the truth and reform whatever is in error.

If I am a Christian before I am an Anglican, then I also hope that Dr Mohler and other Baptists are Christians before they are Baptists, and that they would accept and even welcome the decline of Baptist theology, and the diminution of the Baptist identity, if the Baptists should be in error. But if the Baptists are right, it is the duty of other Christians to join themselves to the truth even if that means the extinction of their confessional identity. I will not deal, therefore, with any wringing of hands over declining numbers in this or that sect, whether Anglican, Baptist, or Romanist, and instead I shall deal only with, inasmuch as I understand it, the truth.

Even if we supposed that Baptist readings of Scripture were true, it could not be denied that actual Baptist churches tended to lack the fullness of the faith. This lack is what Dr Mohler calls a want of grounding in the Christian faith. Even if I allow that Baptist doctrine is the closest to that of the Bible, I can safely say that Baptists are weak in catechesis, patristics, and æsthetics. These weaknesses are extrinsic to Baptist doctrine, and it is certainly possible that the loss of cradle Baptists (if such a term be allowed) to non-Baptist denominations is due to them. It is nothing but commendable for Southern Baptists, led by Dr Mohler, to supply what is now lacking in Baptist practice. It would be a boon to the whole Church, not just to the Baptists, for Baptist churches to better teach the fundamental doctrines of the catholic faith, to use the testimony of the early church fathers to teach the doctrine of the Scriptures, and to use a more dignified mode of worship that, rather than making people feel upbeat, impressed upon Christians a deeper sense of the transcendent majesty of God.

A lack of these things is indeed a bad reason to have people leave their Baptist churches, and weaknesses extrinsic to Baptist identity are indeed bad reasons to turn to new theology, and so Baptist churches should make every effort to supply the defect. For instance, a revival of the Charleston tradition of worship might be in order. If reforms in Baptist churches lead Christians to reject the consumerist’s approach to worship and to church life in general, such change is cause for any Christian to rejoice. If Baptists are not driven into Anglican or Romanist churches by the triviality of many Baptist churches today, nor attracted to cæremonially more elaborate churches by sensuous trivialities, there is nothing for a Christian to object to, unless his loyalty is rather to a tribe than to the true body of Christ. The adoption of biblical principles that are not opposed to Baptist theology is an unequivocal good. A call to such growth, such as it is, requires no rejoinder.

As an Anglican, however, I believe that Baptist theology also suffers from some intrinsic weaknesses. I find it ‘obtuse’, as Alex Wilgus puts it, to hold that every turn to Anglicanism, a tradition intrinsically better grounded in the substance of biblical teaching and the history of the Church, is due almost wholly to a lack of grounding in the Christian faith. In the Christian and Missionary Alliance church in which I was brought up in the faith, even if there was some silliness, catechesis was not fluff. In our youth group, we went over a brief survey of church history which included the East-West schism, Luther, and the founding of the Christian and Missionary Alliance by A. B. Simpson. Another week, we even learned a little about Epicureanism and Stoicism. Clearly, it was not a youth group designed to entertain intellectual slouches. What drew me from general evangelicalism to the Reformed tradition and later to the Anglican tradition in particular was that in these traditions I saw the biblical principles I already knew articulated more robustly, and more cohærently, than general evangelicalism could account for. I think, given how gradually I moved in my doctrinal beliefs, that ignorance cannot take the credit for my move to Anglicanism; nor did I ever quite lose my faith and have to find it again in some new thing. As Derek Rishmawy reports for himself, my evangelical story isn’t so bad. There was a time when I thought otherwise, but ultimately I have better reasons for being Anglican than teenage angst and the reading of Michael Spencer’s Internet Monk blog. Being Reformed and Anglican, I have only deepened in my evangelical commitments.

Dr Mohler is on the side of the angels if he wants Baptist churches to deepen their commitment to biblical teaching. But to do that, I think, those churches ought to consider becoming Anglican.

This entry was posted in Ethics. Bookmark the permalink.