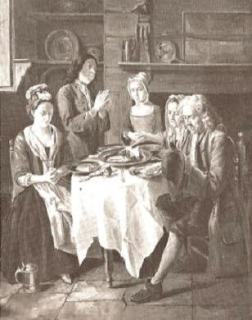 Reproduced below is the introduction to Family Devotions, from the Book of Common Prayer: With prayers at the communion, from bishops Taylor, Ken, and Beveridge, compiled by Thomas Stephen in 1841. Since this Mr Stephen was also the author of The Confession of Faith of the Church of England in the Thirty-nine Articles, and in the piece below refers to the prayer of ‘the Reformed Catholic Church’, we can well be assured of his commitment to the scriptural piety that is the standard of the Church of England.

An established religion is as necessary and useful in a family, which is a little kingdom, as in the state. In both, the voluntary system is pernicious, and will not be found to work well; for what is left to the good pleasure of every man’s own discretion will perhaps be left entirely undone. The learned and pious Dr. Doddridge has very justly remarked – ‘that, if any had rather that a family should be prayerless than that a well chosen form should be gravely and solemnly read in it, I think he judges as absurdly as if he would rather see them starving to death, than fed out of a dish whose materials or shape are disagreeable to him.’ Many, from early prejudice, object to forms of prayer; and many, on the other hand, are incapable of conducting their family devotions without a form. Set forms of prayer have many advantages; but, of all forms, the Book of Common Prayer is incomparably the best. Eloquence is a gift of God which few men possess; neither is it necessary in divine worship. Aaron was a most eloquent man, and had the gift of a fine and ready utterance; yet Moses, who was ‘slow of speech and of a slow tongue’, was appointed to instruct him what to say. It is not, therefore, eloquence, but faith and repentance, with obedience and humility, that are necessary in our devotions.

Our Saviour has commanded every man to let his light so shine before men that they may see his good works, and glorify our Father which is in heaven. If, therefore, it is our duty to walk worthy of our high calling in the sight of men generally, how much more is it incumbent on us to let the light of our good examples be seen in our families? A woe is denounced against those who offend any of Christ’s little ones; that is, who teach children wrong either by precept or example. But, if parents train their children early to assemble round the domestic altar, there is every probability that, with the divine blessing, they will follow the light of their parents’ good example, when they themselves in their turn become masters and mistresses of families. At all events, parents and masters should do their duty, and thereby discharge their own consciences, trusting that God will, in due time, give their families grace to follow their good example.

A great master in holy living [Jeremy Taylor] says: – ‘Let the words of our prayers be pertinent, grave, material, not studiously many, but according to our need, sufficient to express our wants, and to signify our importunity. God hears us not the sooner for our many words, but much the sooner for an earnest desire; to which let apt and sufficient words minister, be they few or many, according as it happens. A long prayer and a short differ not in their capacities of being accepted; for both of them take their value according to the fervency of spirit and the charity of the prayer. That prayer which is short, by reason of an impatient spirit, or dulness, or despite of holy things, or indifferency of desires, is very often criminal – always imperfect; and that prayer which is long out of ostentation, or superstition, or a trifling spirit, is as criminal and imperfect as the other, in their several instances. … In all forms of prayer, mingle petition with thanksgiving, that you may endear the present prayer and the future blessing, by returning praise and thanks for what we have already received. This is St. Paul’s advice; Be careful for nothing; but in every thing, by prayer and supplication, with thanksgiving, let your requests be made known unto God.’

Families are miniature churches, portions of the holy Catholic Church, and parts of the one family in heaven and earth, for which our Lord Jesus Christ was contented to be betrayed, and to suffer death upon the Cross. ‘Families’, says Bishop Jolly, ‘are the little nurseries for the spiritual kingdom of the Church, and the temporal kingdom of the State, which, by their respective duties, and in their different capacities and powers, mutually promote the happiness of each other.’ They are likewise little kingdoms, in which the father, or head, is the prophet, priest, and king; whose duty it is to exhort, rebuke, pray for and with, and reign over or govern, his family. These three attributes are the gifts of God, and belong of divine right to the father of every family. Whoever, therefore, neglects or transfers their duties to another, betrays his trust, neglects his duty and must give an account of his stewardship to his Divine Head in heaven.

If we lift up holy hands with faith in Christ’s word and promises, nothing doubting, he has promised to grant our requests, and to answer the petitions of two who shall agree together, touching what they shall ask. By the following selection from the authorized Liturgy, a whole family not only agrees together, but, at the same time, unites with the Reformed Catholic Church, touching what they shall ask. Although we pray in separate families, yet it is as members of, and in union with, the Church Catholic; and, therefore, the Liturgy is in every sense our best medium. GOD has commanded us to ask, and He has promised that it shall be given unto us — to seek, and we shall find — to knock, and it shall be opened unto us. Three of the evangelists have recorded Christ’s gracious promise, ushered in by his solemn and emphatic verily, verily, that whatsoever we shall ask the Father in his name, believing, he will give it. Although these promises are annexed to the public authorized prayers of the Church, yet they are also applicable to the social prayers of a family; because Christ promised that in whatsoever place two or three are gathered together in his name, there he will be in the midst of them, to bless, consecrate, and accept their united prayers. By thus offering daily the morning and evening sacrifice of our praise and thanksgiving, we learn from infancy to live in submission and obedience to his holy will and commandments, and to place our whole dependence on him in all the changes and chances of this mortal life. By confessing our sins morning and evening, our hearts will be softened and subdued by a daily sight and sense of our manifold transgressions. And by redeeming the time because of the evil days, and being daily renewed by God’s Holy Spirit, our hearts will surely there be fixed where true joys are alone to be found. An apostle has assured us that it requires both faith and holiness to enable us to see the Lord; and our Saviour assures us that, if we will enter into life, we must keep the commandments; the best training for all which, under the divine blessing, is the constant devotional feeling produced by the daily exercise of family prayers; which ought always to be accompanied with faith, hope, and charity. Unless we believe that we shall receive his grace, hope for those things which we are permitted to ask, and love much, we only mock God, by drawing near with our lips, while our hearts are far from him.

Bishop Taylor recommends us to reduce our prayers into collects and short forms, to make voluntary interruptions and to begin again, that the want of spirit and breath may be supplied by short stages and periods. For this purpose, no form can be so appropriate as the authorized public prayers of the Church, which are both short and powerful, and approach nearest to the sublime simplicity and inspiration of Scripture. ‘No church in the world’, says Dr. Comber, ‘was ever blessed with so comprehensive, so exact, and so inoffensive, a composure as ours, which is so judiciously contrived that the wisest may exercise at once their knowledge and devotion – and yet so plain that the most ignorant may pray with understanding – so full that nothing is omitted which is fit to be asked in public – and so particular that it compriseth most things which we would ask in private – and yet so short as not to tire any that hath true devotion. Its doctrine is pure and primitive, its method is exact and natural, its language significant and perspicuous, most of the words and phrases being taken out of the Holy Scriptures, and the rest are the expressions of the first and purest ages; so that whosoever takes exception at these must quarrel with the language of the Holy Ghost, and fall out with the Church in her greatest innocence.’

Many forms of family prayers have been published, but they have almost all the objection of being one long continued prayer, which, although a form, yet they partake decidedly of the objections which are justly made to extemporary prayers, that they are the prayers of the reader, and not of the family. Whereas, the following selection from the Liturgy comprehends, along with prayer and thanksgiving, the great benefit of a confession of our faith; while the audible union of voices in the confession, the audible responses in the versicles and the short Litany, keep the attention awake; and the repetition of Amen, at the end of each collect, not only has the same effect, but gives a positive assent to the matter of the prayer. The family should repeat the confession and versicles with a loud voice, and repeat the prayers mentally along with the father. The collect for the day is to be changed every Sunday morning, and continue the same throughout the week; and is always to be the same as that which is used in the Church, which, while it creates a pleasing variety, exhibits to the eye of our faith the whole mystery of our redemption, presenting us with prayers suitable to the incarnation, birth, life, death, resurrection, and ascension, of our Saviour, and of the sending down of the Holy Ghost. These collects ought, therefore, never to be omitted on the fasts and festivals to which they are attached.

That these prayers may be useful – that it may please God to take from all men all ignorance, hardness of heart, and contempt of his word – that he may fetch all home, who have erred and strayed in these kingdoms, to his flock – and that they may be saved among the remnant of the true Israelites, and be made one fold, under one Shepherd, Jesus Christ, – is the sincere desire and prayer of

One response to “Introduction to Family Devotions”