My ancestral home is in Taishan (Toisan) 台山 County, Guangdong 廣東. Even though I don’t speak or even really understand the Taishanese language – my mother tongue, and that of my parents, is Cantonese – and even though my grandfather was the last person among my closer relations who ever lived in Taishan County, I do identify as Taishanese. (The phænotypes of broadly Cantonese folk differ enough that I can sometimes tell which county people are from, and certainly there are people from Panyu who do not look like anyone from Taishan.) That I cannot understand much Taishanese, let alone speak it fluently, is something I find regrettable. A great majority of my ancestry is from Taishan County or from Xinhui County next to it, whose language is very similar. 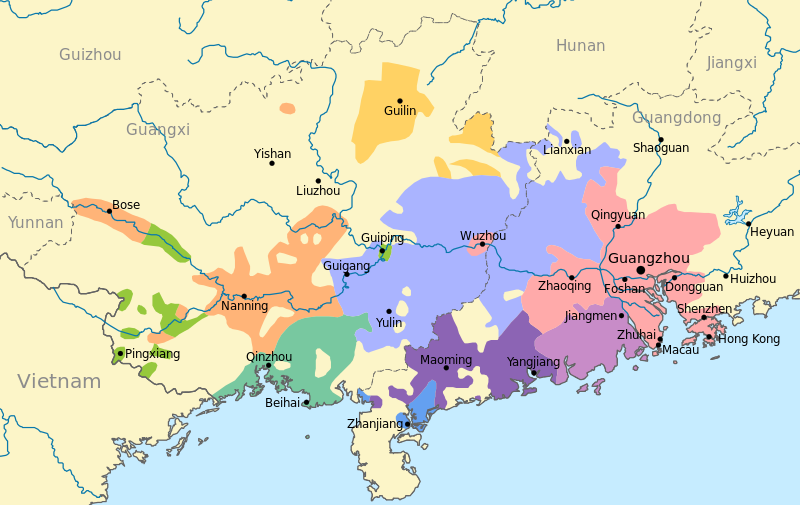 The Seiyap languages are in light purple, and the Guangfu dialects (Cantonese and similar languages) are in pink.

Edit: The Seiyap language group, to which belong the languages of Taishan 台山, Xinhui 新會, Kaiping 開平, and Enping 恩平, is arguably not Cantonese (or Yue) at all, being closer to Cantonese only through convergent evolution. According to Sau-Lim Tsang (no close relation of mine) in ‘Bilingual Education in a Chinese Community’ (pdf, 1982), however, ‘Research on Siyi phonology has also found that Cantonese and Siyi show regular and systematic correspondence.’

Here’s something more colloquial, about certain reduplicative constructions in Taishanese (warning: there’s one curse phrase in there):

Probably the most Taishanese thing about me is my boneheaded hillbilly stubbornness. Who knows? Maybe that could help me learn a bit more of the language.

This entry was posted in Asia, Language. Bookmark the permalink.